I love travelling to Egypt and some of my most memorable holidays have been in Assawan, Luxor, Horgada, Sharm Al Sheikh and of course Cairo. My favourite will always be the Nile cruise though. To drive more people to experience the charm of the beautiful, history laden nation, the Egypt Tourism Authority (ETA) has unveiled a new campaign titled “This is Egypt” (#thisisegypt),

In a change from previous ETA campaigns, #thisisegypt will be digitally-led, focusing on peer-to-peer advocacy and under-pinned by digital media spend, whilst traditional advertising methods will form a secondary promotional level.

Targetting the Arabic traveller from the Middle East region, #thisisegypt will harness the power of digital in a region where internet penetration is 5.8% higher at 48.1% than the world average* and social media sites such as Facebook play a significant role in 88%** of internet users’ daily lives.

The campaign focuses on personalising the Egyptian experience by encouraging the wider Arab audience to consider the variety of holiday which can be enjoyed in Egypt from a vibrant city break in Alexandria or Cairo to luxury beach getaway in Hurghada or Sharm El Sheikh. The campaign will highlight past-times which particularly resonate with an Arabic audience from shopping and dining to enjoying luxury accommodation and exciting nightlife. 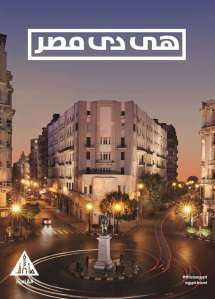 The campaign will highlight Egypt’s touristic destinations into four main geographic attractions: the Nile Valley, the Red Sea Riviera, the White Mediterranean and the Western Desert. The four destinations will be promoted across different audiences and seasons based on each of the targeted markets’ unique attraction points.

The hashtag, #thisisegypt, originally began as a grass-roots movement developed by Egyptians, but now will be adopted and refined by the ETA to boost tourism by portraying an experiential and authentic image of the country to the world.

The three-year campaign will focus on attracting and engaging diverse audiences, with a focus on millennials*** who are driven by personal experience, passion and adventure. Recent studies have shown that millennials take a higher number of trips annually compared to other age groups, driven by the aforementioned factors. Millennials also have the highest level of influence in their respective communities, which indirectly affects the travel decisions of their peers – upon which this campaign heavily relies.

The campaign comes as Egypt continues to work around the clock to enhance safety and security procedures to ensure the well-being of all travellers. The country recently passed an assessment by the International Civil Aviation Organization (ICAO) with inspectors from Russian, Dutch, Emirati and Italian airlines, and is also collaborating with delegations from the United Kingdom, Germany and Russia to implement the strongest security measures possible. As it launches the #thisisegypt campaign, Egypt has pledged to do all that is possible to provide all visitors – internal and external – with a safe and enjoyable experience in the country.