Despite being known as a go with the flow laid back Islander who schedules her life on the hop, I am doing the unthinkable and making sure my entertainment schedule is booked and planned week’s ahead, thanks to the amazing line-up of shows being brought to UAE by the Meydan IMAX. In case you didn’t know, the Meydan IMAX Theatre is a unique Theatre in the Dubai landscape, as it offers a diverse program that dazzles a wide range of audiences. Located at the prestigious Meydan in Nad al Sheba, the Meydan IMAX Theatre is home to the largest screen in the Middle East & Asia.

Thanks to Afsana, who is a fellow member of the Business Women’s Group and the Partner/CEO of Meydan IMAX, I found out about what’s in store and learnt about Maria Stuarda, one of a number of operas by Donizetti that deal with the Tudor period in English history. In fact, the lead female characters of the operas Anna Bolena, Maria Stuarda, and Roberto Devereux are often referred to as the “Three Donizetti Queens”.

Never before performed at the Met, this second opera in the composer’s so-called “Three Queens” trilogy portrays the lethal conflict between Mary, deposed queen of Scotland, and Queen Elizabeth I of England. The opera’s dramatic heart is a confrontation between the two queens that never actually took place in history but that figures in the Friedrich Schiller play on which the libretto is based.

An exclusive broadcast not to be missed at Meydan IMAX! The Met Opera stages its first-ever production of the tragic opera, Maria Stuarda by Gaetano Donizetti – January 28, 2013 at 7:00pm (approximate running time: 195 minutes). The Metropolitan Opera is the world’s leading provider of alternative cinema content, is now shown in more than 1800 theaters in 54 countries, making the Met the only arts institution with an ongoing global art series of this scale….how cool is that?

If you would like to see this and would like to get AED50/- knocked off your ticket, call Meydan IMAX on 800 4629 and mention ‘Fijian Chick’.

Check out the Cast list below and enjoy the show 🙂 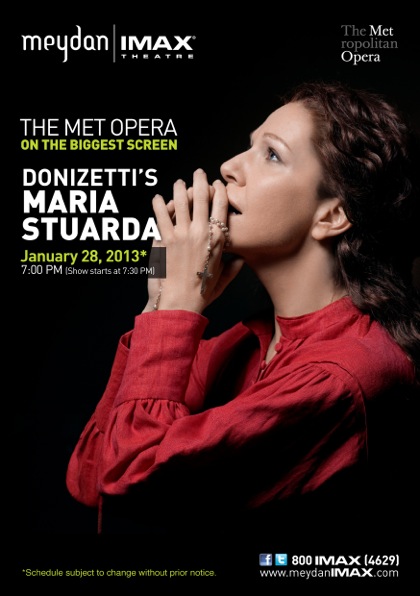