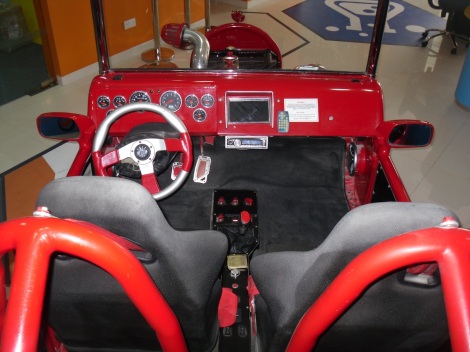 As part of the “Bahraini Innovations” theme, Bahrain Science Centre is showcasing the inventions that are done by Bahrainis in the science and technology fields.

One of the showcases that is attracting attention at the Bahrain Science Centre is the car that was assembled in 2007 by His Highness Sheikh Khalid bin Hammad Al Khalifa. It all started out as a school project. The son of His Majesty King Hamad created a hand- made car with a difference as part of his grade 11 and 12 physics project at the Ibn Khuldoon National School. He designed and built the car with the help of physics teacher Ghassan Afiouni and specialist welder Abdul Qassim.

The car is a two-seater, manual transmission; vehicle has a 2.4 litre Toyota Hilux engine and chassis, welded together with the rear of a Cushman garden truck. It comprises mainly of shaped piping, giving it a unique look. The car has remote-controlled doors, which swing open at the press of a hand-held device and the doors close automatically. In place of a rear-view mirror there is a camera at the back of the car.

However, the engine is started with a standard ignition key. The whole body is made of safe thermal, laminated glass and chrome. The body and the engine are LED lit and there is an in-built television and DVD player. 18-inch chrome wheels and a ‘mounted’ spare wheel at the back enhance the car’s sporty looks. The sound of the “extremely silent” engine is muffled by a triple silencer system.