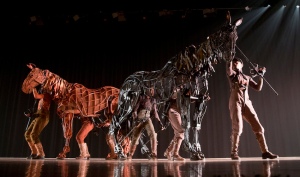 One of the most joyful moments for me this week was seeing an astounding spectacle as the life-size War Horse puppets, Joey and Topthorn, was presented by the Handspring Puppet Co. at the Emirates Airline Festival of Literature 2015 War Horse Concert.

Held at Al Mamzar Cultural and Scientific Association we saw Michael Morpurgo, renowned children’s writer and author of War Horse, bringing to life extracts from his book at the concert and was accompanied by a selection of songs from the National Theatre play.

We have to thank Isobel Abulhoul, CEO and Trustee of the Emirates Literature Foundation and Festival Director of the Emirates Airline Festival of Literature for always bringing innovative experiences to the festival. Having a teenager who lives on books. I am certainly grateful for having this once in a year wonderful weekend.

Michael Morpurgo is an internationally-acclaimed and award-winning author of over 130 children’s books including The Butterfly Lion, Kensuke’s Kingdom, The Mozart Question, and most recently Listen to the Moon.

The Handspring Puppet Co. was founded in 1981. Based in Cape Town, South Africa, the company provides an artistic home and professional base for a core group of performers, designers, theatre artists and technicians. Handspring’s work has been presented in more than 30 countries around the world.

Janni Younge is a multi-award winning South African puppeteer and is past director of the Handspring Puppet Company.The singing and live music was provided by locally based musicians and directed by Shelley Frost.

More than 130 authors are confirmed for the seventh Emirates Airline Festival of Literature with over 200 events taking place from March 3-7 at the InterContinental Hotel Dubai Festival City.