My heart is torn between being in two cities on the 16th of March evening – I am meant to be in Abu Dhabi for one of my biggest assignments and the same night I have an art opening at the Artissima Art Gallery (another awesome client I work with) plus my regular opera date night with my daughter at the Meydan IMAX.
Tash is one of the biggest opera fans I know and she will, with or without me be at the Meydan Theatre as it presents the Met Opera’s sixth installment, Alexander Borodin’s epic Prince Igor which has its first Met performances since 1917 in a new production staged by noted Russian opera director Dmitri Tcherniakovin his Met debut.
Gianandrea Noseda conducts the lush score, famous for its celebrated “Polovtsian Dances,” and Ildar Abdrazakovsings the title role of a 12th-century Russian hero. The cast also includes Oksana Dykain her MET debut as Yaroslavna, Igor’s emotionally fragile second wife; Anita Rachvelishvilias the fiery Polovtsian princess Konchakovna; Sergey Semishkurin his MET debut as Vladimir Igorevich, Igor’s son and Konchakovna’s lover; Mikhail Petrenko as Prince Galitsky; and ŠtefanKocán as the warlord Khan Konchak.
For the lucky people who will be in Dubai that night, do go and see it and have an amazing experience – one that I now treasure each month at the Meydan IMAX with my little diva. As it’s a school night, she will once again be the only young cool chick you will see on opera nights at Meydan IMAX. 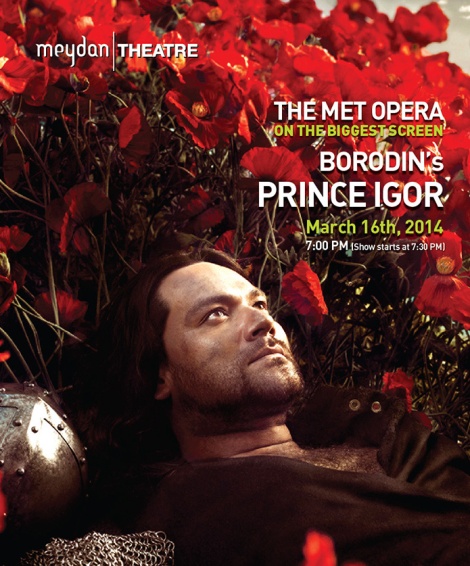