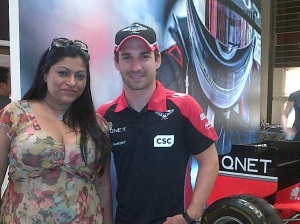 It’s finally here :). As the 2012 Formula 1TM Etihad Airways Abu Dhabi Grand Prix fast approaches, fan excitement is reaching fever pitch. In addition to the thrilling action of one of the most exciting F1 seasons to date, fans at Yas Marina Circuit will also experience all the bumper to bumper action of the V8 Supercars Championship, official support race of the 2012 Formula One Etihad Airways Abu Dhabi Grand Prix….I have my official shirt and cap to wear thanks to the gorgeous Timo Glock who is my current hero….and its signed :):):)

Our friends at Yas Marina are sending us latest updates and diva is smiling heaps as the excitement unfolds. Richard Cregan, Chief Executive Office of Yas Marina Circuit, host of the Formula 1TM Etihad Airways Abu Dhabi Grand Prix says the popularity of V8 Supercar is rising rapidly around the world.  The addition of the V8s as this year’s official support race adds a new dimension to the 2012 Formula One Etihad Airways Abu Dhabi Grand Prix and he and his team are super proud to host them on what will be an action-packed weekend.

While based in Australia and hugely popular on home turf, V8 Supercars is developing a strong fan base both closer to home, in New Zealand as well as throughout the Middle East and in particular Abu Dhabi.

As the official support race for this year’s Formula 1TM Etihad Airways Abu Dhabi Grand Prix, here are eight things to know about the V8s:

1)      From Australia to Abu Dhabi: V8 Supercars is a touring car racing category based in Australia and run as an International Series under Fédération Internationale de l’Automobile (FIA) regulations – just like the Formula One Grand Prix.

3)      An International Season: The 2012 V8 Supercars Championship consists of 16 events across Australia, New Zealand and the Middle East including the racing at the 2012 Formula 1TM Etihad Airways Abu Dhabi Grand Prix. Next year they will debut at the Circuit of the Americas in Austin, Texas.

4)      An F1 First: This year’s races are the first time a points-paying V8 Supercars Championship event will be held on the same weekend as a Formula 1TM World Championship.

6)      Going the Distance: This year’s support races will be the first time the V8 Supercars will race on the full 5.5-kilometre length of Yas Marina Circuit, after using a 4.7-kilometre version in previous races.

7)      Defending Champions: Winners of the 2011 Yas V8 400, set to defend their Yas Marina Circuit wins, are Jamie Whincup of TeamVodafone , who took top spot in Race 1 of last year’s Yas V8 400, and James Courtney of the Holden Racing Team who came in first in Race 2.

8)      Lean, Mean and Green: All V8 Supercars run on 85 percent CSR Ethanol, a renewable fuel made from the bi-product of the sugar refining process.

One response to “EIGHT THINGS TO KNOW ABOUT THE V8 SUPERCARS”