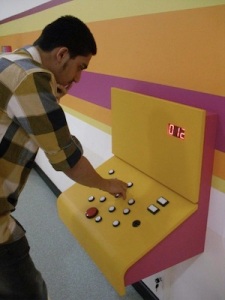 Ali Al-Hawadi, one of the Facilitators in the Bahrain Science Centre, using the ‘Memory Test’ display in the ‘Test your Talents’ gallery

Anyone keen to put their short-term memory to the test can take part in the record attempt and learn about the fascinating world of neuroscience. The games will be simple and require no resources or preparation and will last 10 minutes. By sitting a ten-minute memory test, which has been prepared by renowned experimental psychologist Professor Bruce Hood, the pupils will be contributing to a nationwide scientific study.

Dr Mark Downs, Chief Executive of the Society of Biology, says: “This will be the climax of Biology Week, with schools, universities, and learned societies testing their memories simultaneously. We’ve been thrilled with the number of people who are keen to take part and we have high hopes for setting an impressive world record.”

According to Khalid Eshaq Alkoheji, Undersecretary for Community Development in the Ministry, the event is one of many planned at the Bahrain Science Centre to inspire and educate visitors about the life sciences.

Participants will sit a ten-minute memory test, prepared by renowned experimental psychologist, Professor Bruce Hood. The data from people of different ages will contribute to a scientific study.

Alongside the attempt school pupils will learn about how our brains store memories (or at least convince us we have made accurate memories!). Anyone who is interested in how the brain works, from remembering how to make a cup of tea to falling in love can watch the Society of Biology Brain Explorers video series.

Dr Downs says: “We hope the record attempt will highlight the importance of neuroscience research, especially into diseases like Alzheimer’s. The memory game is part of a series of events being held to mark Biology Week which runs from 13th-19th October and aims to inspire students about the life sciences.

The Bahrain Science Centre, located in Building 334, Road 109, Block 801, Riyadh Avenue, Isa Town in the Kingdom of Bahrain has several permanent interactive displays that test and develop the memory of visitors.

The Society of Biology (www.societyofbiology.org) is a professional body for bioscientists – providing a single unified voice for biology: advising Government and influencing policy; advancing education and professional development; supporting their members, and engaging and encouraging public interest in the life sciences.

The first ever Biology Week will take place on 13th-19th October, organised by the Society of Biology. Events around the country will give everyone the chance to learn about biology, the science of the 21st Century. www.societyofbiology.org/biologyweek

The Bahrain Science Centre (BSC) is an interactive educational facility that targets children, youth and families of Bahrain. It is located in building 334, Road 109, Block 801, Riyadh Avenue, Isa Town, Kingdom of Bahrain. The science centre has six interactive exhibition galleries, an auditorium, four laboratories and a café/shop.

The role of the BSC is to promote awareness of the importance of science and technology, complement the school curriculum, stimulate curiosity and innovation, and create a forum for public debate on science and technology issues. The topics covered by current exhibitions include junior engineering, human health, the five senses, earth sciences and biodiversity.

Focusing on hands-on learning using interactive displays and people-centred programmes, such as science shows, Bahrain Science Centre also strongly promotes creativity and innovation as well as cross-generational learning. The science centre will also endeavour to promote an awareness of Bahrain’s contributions to science and technology and a strong Bahraini identity. It is an ideal family edutainment destination.